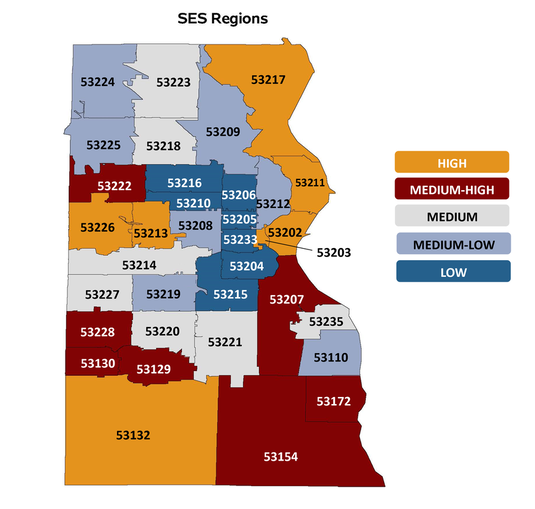 Socioeconomic Status and Health
The relationship between socioeconomic factors and health outcomes is one of the most robust and well documented findings in social science and medicine (Braveman et al., 2011) and has been documented in numerous communities across the nation, including Milwaukee by members of our current research team (Vila, Swain, Baumgardner, Halsmer, Remington, & Cisler, 2007). Individual SES factors such and education and income are highly predictive of health outcomes, as well as the neighborhood effects associated with concentrated poverty (Do, 2009). Furthermore, race and ethnicity are closely linked with socioeconomic status in the U.S. Because Milwaukee is one of the most racially segregated large metropolitan areas for Blacks and Whites in the U.S., the negative health effects associated with racial segregation, concentrated poverty, and neighborhood conditions is an important public health concern (Logan & Stults, 2011).

In 2009 the Center for Urban Population Health and partner organizations launched the first Milwaukee Health Report. The Milwaukee Health Report was based upon the population health framework and the foundational work of the University of Wisconsin Population Health Institute's Wisconsin County Health Rankings. In that framework, health outcomes are considered the result of a set of health factors (e.g., healthcare access and quality, health behaviors, physical environment, and socioeconomic determinants such as income and education). Thus, the distribution of health outcomes and health disparities result from differences in the distribution of the determinants in the population.

The Milwaukee Health Report provided information regarding health disparities among the SES groups within the city, and offered comparisons of health outcomes and health determinants between the City of Milwaukee, the State of Wisconsin and the United States. 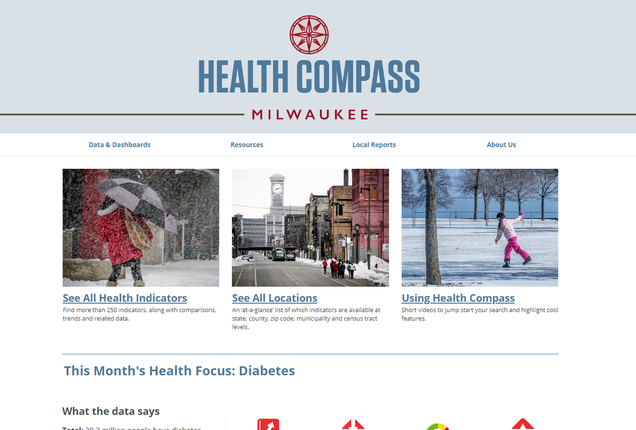 New Direction
A group of researchers from the Center for Urban Population Health (UW School of Medicine and Public Health, UW-Milwaukee and Aurora Health Care), the Medical College of Wisconsin, and the City Health Department have been working to refine and improve the methodology and presentation of the report. In the process and in partnership with the Milwaukee Health Care Partnership, an expanded number of health factors and outcomes are now available on a website versus the paper report. In addition levels of SES groups have been expanded to include five levels of group versus the original three levels.

​Visit Health Compass Milwaukee to explore health factors and outcomes by SES groups.
What We Did
Defining Socioeconomic Status.  The Milwaukee Health Report described the city’s health determinants and outcomes by socioeconomic status (SES).  SES is determined based on income and education levels following a previous approach used by Vila and colleagues (Vila et al., 2007).

Thirty-five ZIP (postal) codes are wholly contained within Milwaukee County, representing one-eighth of Wisconsin’s 5.8 million citizens (U.S. Census, 2015). To stratify Milwaukee’s ZIP codes into five groups by SES, we used an SES index composed of two equally-weighted components (Mustard & Frohlich, 1995). These components were based on 2014 data and included:
Selecting Population Health Measures.  Employing the Population Health Framework (Kindig, 2007; Kindig et al., 2008) and focusing on two categories of health measures: health outcomes and health determinants. Health outcomes are intended to describe the current state of health, whereas health determinants are viewed as risk factors or predictors of health outcomes. Currently there are more than 30 measures of health outcomes and determinants selected using the following criteria:
Additional measures will be continually be added as new data is obtained and analyzed.

What We Found
Dramatic health disparities exist – and persist – by socioeconomic status within Wisconsin’s largest county.  These findings continue to support those of other researchers, including the County Health Rankings & Roadmaps produced by the Robert Wood Johnson Foundation and the University of Wisconsin Population Health Institute which suggests socioeconomic status as one of the most powerful drivers of population-level health outcomes.  As we noted in our inaugural publication in 2007, “…widely disparate environmental and socioeconomic contexts mean that not every individual has the same opportunity to initiate or sustain healthy choices” (Vila et al., 2007, pg. 369).  Furthermore, it has become increasingly evident since then that the chronic stress of living with poverty, racism, low educational attainment, and social disruption can affect the physiology of people directly through chronic elevations in stress hormones, such as cortisol and adrenaline.

​Our report continues to call upon all health professionals, elected officials, community stakeholders and policy-makers to work together to create public policies and programs that support thriving communities and healthy environments for all Milwaukeeans to live, work, play, and make healthful choices. This means attending to governmental and institutional policies that improve the built environment, educational attainment and social cohesion, as well as address policies that reduce unemployment, racism, and poverty. The Healthiest Wisconsin 2020 Plan (Wisconsin Department of Health Services, 2010) and the What Works for Health: Policies and Programs to Improve Wisconsin’s Health online database (UWPHI, 2010) provide additional details, objectives, and recommendations in these regards.
<
>